The idea of a greenhouse 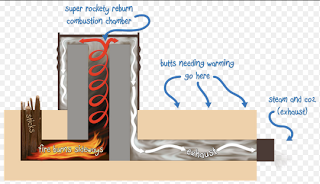 I first heard of a rocket stove in my Permaculture Design Course in 2010 and knew at that minute I was in love.  In permaculture you look to your excesses/waste to use as resources.  Let me tell you, we have branches and sticks galore around here.  I have already planted several hugel kultur beds with our excess sticks, but still we have more.  So, why not have a rocket stove?

It also helped that my friend was moving south and needed to get rid of his clay.  He offered it to me and I snagged it:  several tubs worth.  AND, he shared the secret spot where he dug it out of the earth .

It was a warm sunny fall afternoon---a year ago---when we decided to start planning for a greenhouse.  I invited the state's guru on Rocket Stoves to come over for a consult, Lasse Holmes.

Chewing on a piece of grass and asking us all sorts of questions about our needs for a greenhouse, Lasse planted the seed of building with straw/clay as a building medium.  He wondered if we needed to grow all winter or a lot of it anyway.  But whatever we did, he said we needed a roof first.  A rocket stove with a clay bench absolutely needed a roof.  So I began designing a greenhouse to house my rocket mass heater.

Now why do we need a greenhouse, you ask?  We have such a lovely solarium, right?  Well, Bob's clever design was to make sure the sun goes over head in the heat of the summer, so that we don't cook inside our cave. So it stays relatively cool inside our house, really not warm enough for a greenhouse. (Well, this summer was an exception)   PLUS, it is our greywater recycling system, housing our  indoor wetlands and a pond, which means the dampness is a perfect place for aphids-- my sworn enemy. 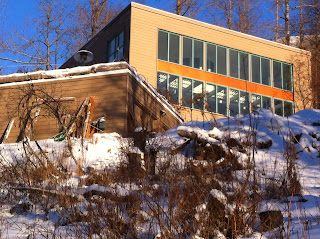 So before I could begin 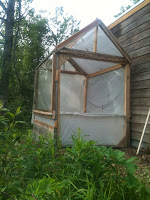 designing the new greenhouse, I needed to tear the old one down. Yes, I already had a greenhouse. We built it with scrap wood and plastic, but it was so hard to regulate the temperature, nothing really grew in it.
However, it was in a great location----against the southwest facing wall of the garage on a slope.   So I started designing my new greenhouse in that same space. 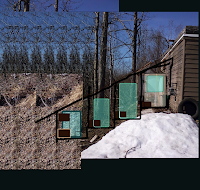 Here is my original thought.   I would simply put some concrete piers along the side of the mountain to hold the posts for the walls and then add the wood scraps and recycled windows.  I had no plans of making it difficult by digging out layers.  Unfortunately, the more I showed people my idea, the more they told me it wouldn't last.  If I wanted this greenhouse to last longer than a couple of years, it needed posts put down three feet into the ground.  Well, I thought, if I had to put posts in, I could have something like Mike Oehler's greenhouse.   I really liked the idea of gardening while standing up and also if there were a cold sink at the bottom, I could keep it warmer at the top.   But I planned to take my time digging out the layers after I got the roof on and the stove in. It would be a task for the winter time.

Spring rolled around and things started to get serious. I needed to order the roofing.  But how much?  I made a sketch and put the stairs against the south side to keep the sunlight streaming in. I ordered six 25' panels from a guy over in Birchwood, not far from here.  Each panel was 4' wide.  I started organizing the class Lasse would teach on June 1, so that we could learn how to fill the walls with straw clay.  Of course the roof had to be on BEFORE June 1, right?

When I handed Curt the design, he looked at it and looked at it some more and decided he needed something with a few more details.  I had been wanting to try out google sketch up anyway, so I tried it.  I have about 15 different plans, but we settled on #8.  The real trouble with the design, however, was that we really didn't know the slope of the land and it was steeper toward the back of the garage than the front of the garage.

Curt cut down a small tree and we ran a string from the top of the roof to the top of the tree creating a 90 degree angle with the help of the level, and we arrived at a number.  It reduced nicely to 3/4, so the rise was 4 and the run was 3.  To somehow draw that when the ground wasn't even?  That was beyond what I learned in High School Geometry.  So I just started drawing. 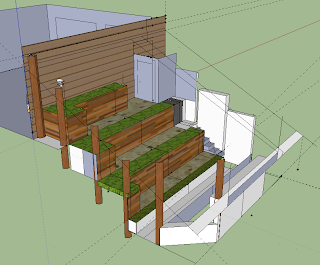 It seemed like spring would never come.  Finally I got outside around April 1st and started shoveling off the mountainside to encourage more melting.  I was sure we could start working on May1 and could easily have the roof on by June 1.