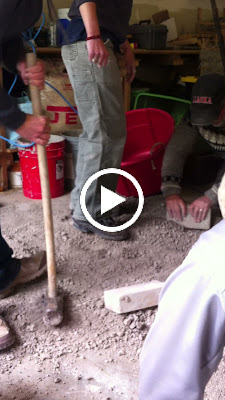 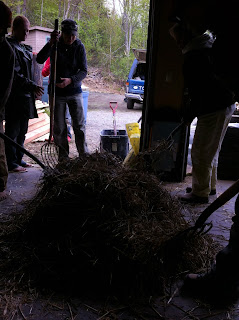 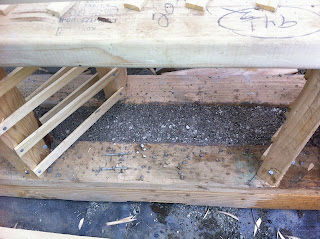 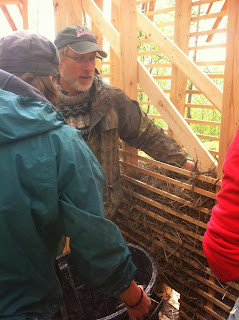 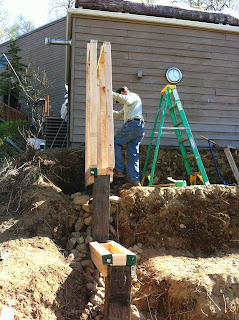 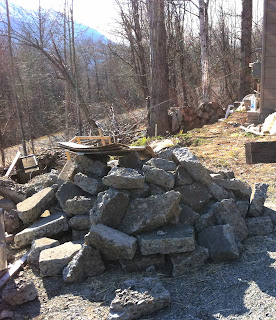 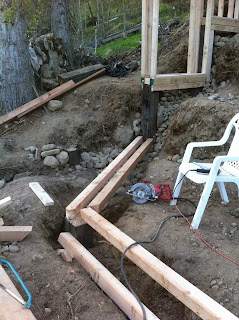 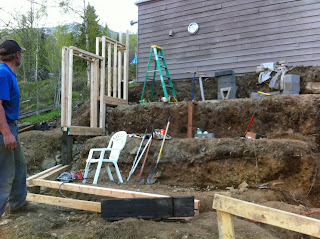 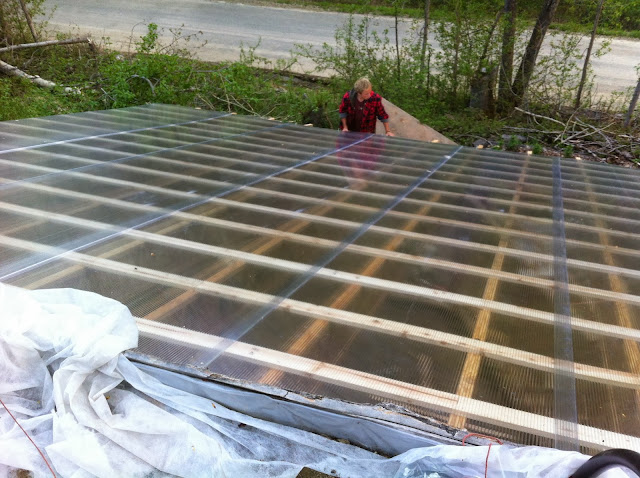 Nick came to help with the roof on Thursday and Friday.
Saturday morning the class started and the roof was up.
Posted by Cindee at 1:56 PM No comments:

Cold, cloudy, not much like spring....we began the process of building the northernmost clay/straw greenhouse in the United States.  I happened to notice that Erica Weisner put out a call for anyone who wanted to be included in her new book on rocket stoves in greenhouses. I jumped.  She would give me her plans for a small fee.  I would follow them and then do research for her so that others could learn.  I was happy to help pave the way for rocket stoves and I was excited to be included in her book.  We started out with the best of intentions. 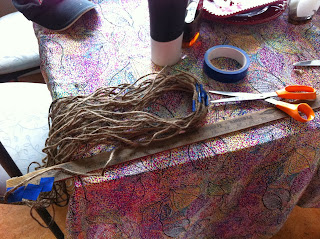 The first task was to find the corner posts of the new building.  Sounds easy, right?  We had the side of the garage which we presumed was straight.  All we needed to do was to find the other 3 walls.....on an uneven slope....in the cold....   I made a long tape measure with duct tape and twine, so that we could measure longer than our 50' tape measure could reach.

We started with 4 ft out and we knew eventually it would be 3 ft down.  So we placed a post every 4 ft from the garage on both sides..... 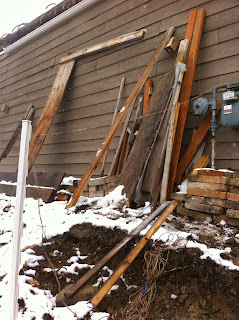 starting at the top and moving down the mountain in what we assumed was a straight line.    We used a plumb bob to make sure each post was vertical.

Then we tried to find the bottom corners and make sure they were square.  Some of you reading this might see the error in our ways.  We just had no idea about how to come up with square corners.  We did A LOT of math that day.  Listen up, kiddies, you really DO need to pay attention in Math Class.  We had additional troubles since the ground was still frozen where we wanted to pound our stakes in.


We tried and tried to get the corners square.  It wasn't working.  We decided that maybe the twine was stretching, so we abandoned the project until we bought a 100' tape at the store the next day.

We did the 3,4,5 triangle method, and still it didn't work.  Then we thought we'd try measuring the diagonals and found that we couldn't make that match either.  We were out of luck.  It was close, just not as close as we wanted it.  Then it snowed!!!  May 15th or so. We couldn't believe it!   That put us back a couple of days.  June 1st was looming and we had to have the roof up.  Too bad there was no way to get a little back hoe over to that spot.

As we continued the more we kept wondering how we would dig out the dirt during the winter?  It wasn't long before I realized we would need to dig the levels now---before we built the walls.   Curt started where we thought the steps were going to go.   It would be a huge amount of work to get ready before June 1.

So I hired my friend Nick.  He and I worked on it for 8 hours the first day.  Curt and I continued working on it.  We started at the top since that was unfrozen and worked our way down the mountain.  Sometimes Curt had to pick ax through the ice. 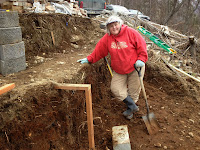 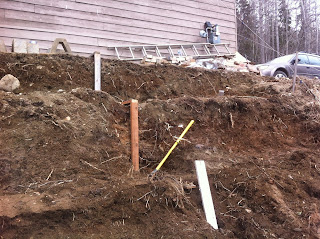 Finally we were ready for the posts.  I had ordered Alaska Timbers from Indian.  I wanted this to be an all Alaskan, all natural greenhouse.  Sadly the sawyer got the flu and couldn't get out of bed to deliver the wood.  Because time was of the essence, we had to scramble.  On Craig's list we found some old railroad ties.  We borrowed the neighbor's snowmachine trailer and went to get them.  Yes they leach into the ground some, but on the other hand, I support railroads and we need to do something with the old railroad ties rather than throw them in the landfill.  Why not reuse them?

But then came the problem:  ICE!  Not just the stuff we could expose to the sun and let it melt.  It was more like permafrost.  We needed to call in the big guns!  :0)
Curt and I held on to that auger for dear life so it didn't swing around when it hit a rock and kick you in the ribs.  That hurt!  We stopped every so often, got down on our knees and dug all the rocks out of the hole so we could do it again.  We kept it a week and got the outside holes dug.  I had wanted inside posts as well, to hold up the roof, but after we did the outside ones, I was willing to listen to another idea of Curts:  BCI beams.  Manufactured in Oregon, but.....no more drilling?  I went for it.  I was done with drilling.

It took a little bit of effort to get those humongous railroad ties in place too. 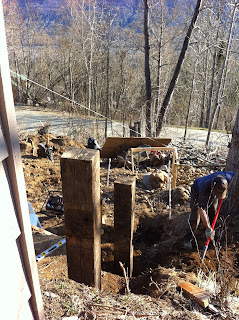 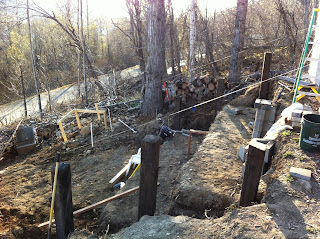 We were so happy to get rid of the auger and wanted to rest, but June 1st was coming fast.

The old garden cart needed a rest though.  Curt worked it hard! 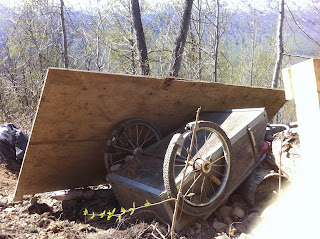