The sun is shining through the snow covered branches.  The solarium is warming up.  What better time to go and start harvesting nettles?   Since the sun has been back, they have jumped up in height and are growing so fast.  I decided to make my first batch of Nesto!  (that's pesto with nettles).

I decided to live dangerously and not don my gloves.    I circled the solarium like a hungry wolf deciding which plants could spare their tops for my mid-morning snack.  I clipped the tops of the nettles into a large bowl with my scissors and held the bowl so that they would simply drop in and I wouldn't have to touch them.  I got maybe 1 cup of leaves and a couple of stings, but nothing too bad. 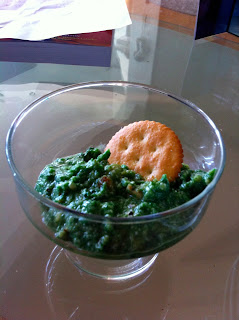 I was rather disgusted by the aphids who had situated themselves on the leaves of one plant, but I did not want to touch the leaves to get them off.  I decided they would die in the boiling water.  Sure enough after 3 minutes of blanching the nettles in salted boiling water, I could see dead aphid bodies floating on the top.  I scooped out the nettles and dumped them in some ice cold water to stop the cooking.  I rinsed them up and down to make sure any dead bodies would be left behind.

I rang out the water and then chopped up the nettles into small wet chunks.  It was about 1/4 cup.  I added an equal amount of walnuts, and about that amount of parmesan cheese, some olive oil and then I mixed it with my handy-dandy hand-held stick blender.

I'm eating it now.  I'm waiting for that little feeling of warmth that supposedly comes after ingesting it.  It's pretty good, but I'm kicking myself since I forgot the garlic.  That would have been better.  I hope the nettles grow fast now that I've cut them.  I want to try it again!  Soon!