IT'S REALLY ALL ABOUT DESIGN

I love touring people through the bioshelter!  Every Thursday this summer folks come out and I get to tell them about how we live lightly on the planet.  This last Thursday a gentleman toured and at the end, even though his eyes were glassing over with so much input, he summarized, "So really it's all about design."  He nailed it on the head. 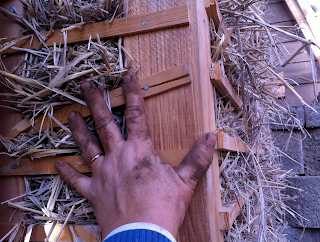 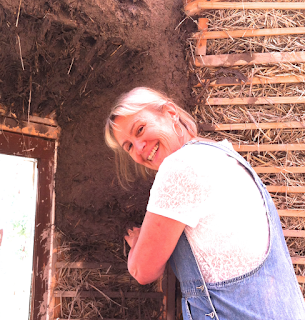 To live permanently on the planet humans need to design systems that work with nature so that we aren't harming the planet.  In our bioshelter home that means that we use the rain water for all of our needs and then return the surplus back to the environment as clean or cleaner than when we captured it.  That means we feed worms all of our waste products (anything that's not plastic), so that we can return that surplus back to the environment.  That means we used all biodegradable materials (except for the roof) to build our greenhouse.  The walls are made of clay we dug from the ground, straw we got from Palmer, and sand we got from Alaska Sand and Gravel with windows destined for the dump from Craig's list.  For insulation, we packed the clay covered straw in between two walls 12 inches apart and plastered the outsides of the walls with natural clay plaster .  We also built a rocket stove  with some firebricks, which is covered with an Alaska clay and sand plaster to warm the greenhouse.

It's time to change the way we live.  We need to design and plan for a future that stops harming our fragile ecosystem. 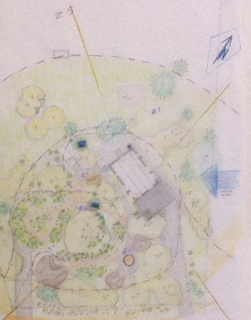 So the question is:  how can you design this change?  An easy way to begin is to start growing your own food or buying from local farmers, and then composting the excess waste.  Growing your own food means you are not spending carbon for your food to be sent to you from the Lower 48!  Usually food is flown over 1,500 miles to get to your plate.  Some people are growing food, but are still importing fertilizer made from chemicals to fertilize their food.  Without going into the health concerns of adding chemicals to our food system, we can design a system that utilizes a natural fertilizer source:  animal manure. And it's local!  Designing a local food system that includes animals, especially when they have other benefits like meat and eggs, is extremely environmentally friendly.

This is only the beginning of the design process.  Designing systems for fodder or for watering those animals and plants, or for gathering produce from the wild, or for feeding the microorganisms in your soil, or for better ways to share food with each other, or share the work load....these are all things that you learn in a permaculture design course.

It seems to me that more and more people are feeling the need to become more and more self-sufficient, localized, and healthy.  It's time.  You can get a kick start by taking a permaculture design course this winter.  It's all about designing your sustainable future and our planet's future simultaneously.
Posted by Cindee at 12:47 PM No comments:

I was lucky enough to attend a tour of the first rammed earth house being built in Butte!  It’s an amazing, albeit expensive way to build a house!  According to the architect on the project, if you were to simply build a stick-built house with 12 inches of insulation, you would pay 15% of what this house costs to build.  Here’s why.

There are 10 people working for 10 weeks.  The material has to be made on site.  There is a lot of equipment that needs to be rented.

But what you end up with is a semi-natural built home, and I'm betting it will last a lot longer than the 50 years a standard home is built to last.

First you measure out the materials. 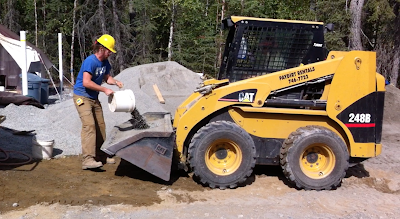 The sand went into the bobcat bucket first and was leveled off.  Then they added 2 5 gallon buckets of D-1 rock.

Next, they dumped it into a giant round mixer. 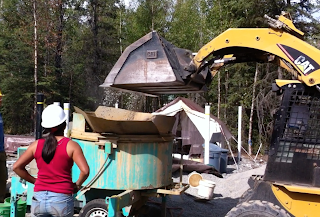 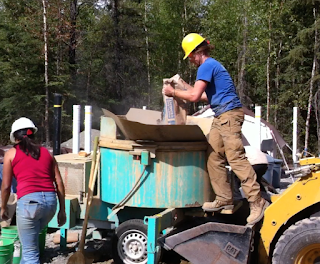 Only one bag of Portland Cement, which makes up about 8% of the walls.  That’s important because Portland Cement is extremely dirty to make and is responsible for atleast 5% of greenhouse gases each year!  The cement is what holds it all together.

I asked why they couldn’t use clay and one of the answers was that it is hard to find a big quantity in nature and to buy it is cost prohibitive.  I’m also not sure it would work because of the way they are building the walls. 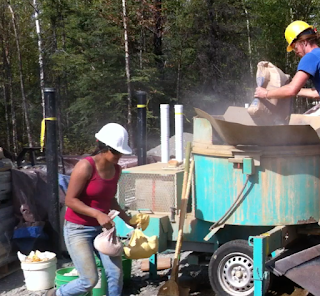 Next they added the dyes.  The 5 gallon buckets behind the woman were all filled with pre-measured dyes.  She collected 3 different bags out of 3 different buckets and handed them up to be mixed in.
They had done 2 test benches to decide which colors to use.   Here is one of them. 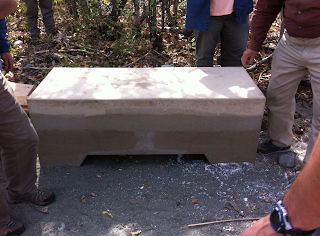 Each layer is another batch with a different color in it.  They ended up not liking these colors, but went with a warmer version of these.

Then they added water.  It looked like they didn’t measure, but were able to go by what it looked like. 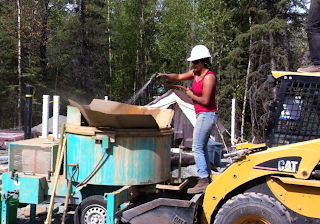 I noted that this is a cake recipe since they were mixing all of the dry ingredients first before they added water.  I’m sure it’s easier that way.

Next they delivered the material up to the guys on the scaffold.   You can see that it does not look like a glob of mud, it’s just moist enough to RAM into place. 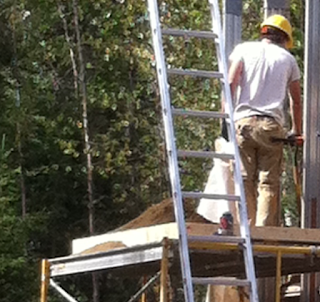 The ramming process was the biggest part of the production.  All of these forms had to be shipped up from Washington State.  The builder has experimented with all sorts of forms and found these metal ones to be able to withstand the mechanical ramming process. 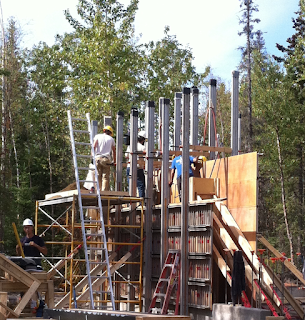 Note that there is wood on one side, the inside, to produce a smoother wall.

It’s a lot thicker than it really is.  In total the wall is 2 feet thick, but what they are doing is ramming an 8” wall on the outside, placing 8” of insulation in the middle, and then ramming another 8” on the inside of the wall.  They are staggering all of the seams so there is never a straight through passage where air can flow in. 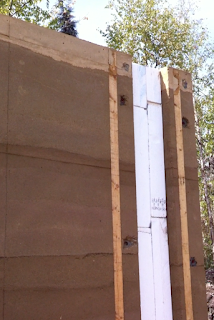 This is actually an outside corner.  The outside wall, inside insulation and then the wall continues at a 90degree corner to make the wall of the bedroom.

You can see the batches of material they rammed by looking at the layers.  When they get close to the top, they pour a wet batch to seal the top of the wall.  When they pull off the forms, it looks like this. 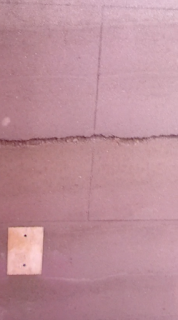 Each place that needed an input like electric, or gas, or TV cable had to be planned for, so they could do the wiring later.  So this signifies that something will come into the room there and then once it’s in the house, it will be wired or piped in the floor to other rooms in the house. 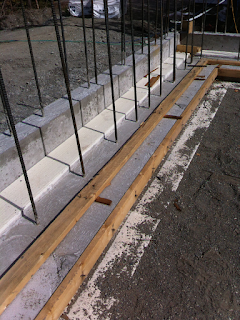 The outside wall is the taller poured concrete---it’s 8 inches and the materials will be rammed all the way up the wall of the one story home.  They do one wall at a time.  The middle white strip is for the insulation so it doesn’t have rebar.  The inner wall is 8 more inches of the rammed earth material.  They will put the plumbing under the poured concrete floor.  (yikes)  There will be 6 inches of foam on top of the slab. So the floor will come up to the inner 2x6 that’s laying flat.  The electricity and piping will go above the insulation, but under the floor.

They are adding a vapor barrier between the inside 8” of material and the insulation, but the architect said that was overkill since any moisture can get in the walls and nothing that’s in there can rot.  So it doesn’t really matter.  There will be an HRV unit in the home to bring in fresh air every hour since it is so tight.  If all goes as planned, the home will be a 6 star energy efficient home.   15,000 btus per hour

Of course I couldn’t take pictures of the roof yet!  But the plan is to have a regular standard roof.  There will be beams on top of the rammed earthen walls to attach trusses to.  There will be 18” of foam blown in the ceiling and then an impermeable membrane covering the ceiling of the whole house.

The reason that they didn’t just do a poured concrete home, was that they are looking for ways to build cheaper in the Aluetians.  The folks doing this are from the Aluetian Housing Athority.  If all goes well, they could bring this type of home to that bioregion of Alaska in the future.  There will be sensors built into the walls and they will take measurements for 2 years before they decide if they should build more of these homes.
Check out the boxes that they have to build for the windows!  It’s too bad they can’t bevel the windows like we can with our clay windows. 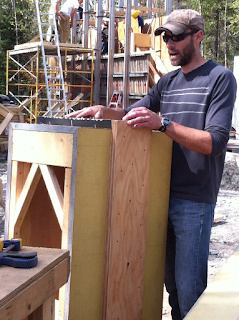 That’s 1.5” plywood around there!  It looks like it should be able to hold up to the ramming.  This is the bathroom window form.  I believe the form will be pulled when it dries and that outside plywood frame will stay to put in the window.

They are planning a lot of glazing on the south side of the house, of course and not any on the north side.  There is a chance that it will be too hot in the summer, but the hope is that all the walls and floors will collect the heat in the day and give it back at night.  The question remains how much will you have to heat it.  I forgot to ask if they will have a standard boiler.  I imagine they will.