Adventures of a Fall Storm


The fun part of living in this house is that there is always a new problem to solve---you never know what is going to happen next.  But these adventures got a little out of hand this week!

Our solarium is really a 42x12 foot cement swimming pool.  It's about a foot deep at the shallow end and 8-10 feet deep at the deep end.  It's filled with gravel and plant roots.  It's really a very ingenious system.  This week we discovered the design flaw.

After a HUGE rain/wind storm and then another one a week later, we were aware that the cistern was getting close to over-flowing.  When that happens, we simply start draining the water down the mountain.  Not a big deal.  We just have to watch so the water doesn't start flooding the basement.

We only drink 2 gallons of water a day at the most and that's the only water that leaves the house via pee.   All of our grey water is recycled and pumped back into the solarium via the fish pond.  Then the water over flows the fish pond and seeps back into the gravel swimming pool and then is pumped into the cistern for reuse. It's a great system------except when there's torrential rains. 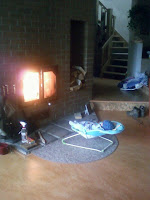 Well, it was a "perfect" storm: a record rain fall, no electricity and a baby visiting.  (Of course, after the fact, we realized we should have gone to buy disposable diapers).   All was well until the electricity went out.  Since we've lived here (5 years), we maybe had one other power outage longer than 2-3 hours.  This one was all day about 7 hours.  We watched it rain, started a fire and really didn't think much of it.

That evening when the lights came on again, I went down into the basement to check to see if there was room enough in our 1st 50 gallon drum to wash some diapers.  That barrel is the one that takes all the grey water and it's where the bacteria start eating all of the food scraps or whatever goes down the drain.  There wasn't.  It was at the top---which meant no showers OR diapers that night.  Not a big deal really.  We could wait for the morning for showers and diapers.

But I didn't quite understand why it was full.  I started checking and adjusted all of the air hoses and found that no matter how much pressure I added to the first barrel, there was no water going to the second barrel.   I took the whole guts out of the 1st barrel and finally found a hair ball stuck in the pipe.  I blew it out, put the guts back together and we were back in business.  That's only happened one other time.  Strange.

As I was leaving, I noticed water on the floor.  I stuck my fingers in the cistern to feel water at the very top.  Yup.  That was the source of the water on the flour.  I looked down into the sump area to see if any water had gotten down there.  Sure enough, there was water.  I got out the shop vac and began sucking water.  I emptied maybe 35 gallons of water and dumped it down the mountain toward my "hugel kultur" garden.  It needed lots of water anyway. Then I turned on the garden hose and started running the cistern water down the mountain as well.

Just about then I heard some hollering upstairs.  I decided the baby must've sat up by herself or something.  I kept checking the rest of the systems.  Low and behold another pump wasn't working---the one that sent water from the third barrel into the fish pond upstairs.  I swore under my breath and started problem-solving.

Just then Curt walked in the basement door and said the solarium was flooding.  What?  Really?  How could the solarium flood?  We decided to figure out what was wrong with the 3rd barrel pump first.  Somehow the float valve wasn't floating to trigger the pump to pump the water upstairs into the fish pond.  I'm not sure what we did, or if what we did even worked, but after jiggling and wiggling and freeing it from its plastic tie, it started working.  We got the hose and added water to the barrel to check it.  Low and behold, it came on, just like it was supposed to and pumped the water ---so who knows?  We headed out the door pulling all available hoses with us to McGeiver some other fix in the solarium.

Water was pouring in.  Where it was supposed to go into the gravel, there was a fountain of water spurting every which way!  Our only conclusion was that the gravel was saturated and would accept no more water.   Yes, that 42x12foot swimming pool of gravel.  Obviously if the cistern pump can't pump for 8 hours when the power is out, it can't rain anymore.  The heavens somehow didn't get the memo.  Note:  don't build this house in a rain forest. 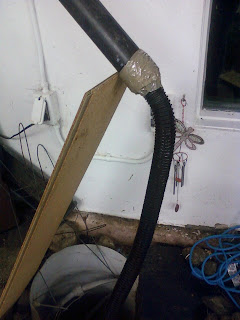 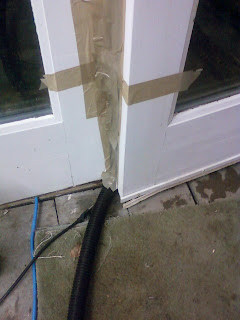 Luckily one of the hoses Curt grabbed was the shop vac hose.  We connected it to the incoming rainwater pipe.  It didn't exactly fit, but I held it as well as I could while Curt hunted for the blasted DUCT TAPE, which never stays where it is supposed to be.  So we used packaging tape and taped the shop vac hose onto the rain pipe and ran the other end outside the door and down the mountain.  We found an old piece of flooring to prop the rain pipe up with.  Then Curt  taped the door closed----the hose was about an inch wide, so we didn't want every moth in the neighborhood looking for shelter in our house.  So he used quite a bit of duct tape, which is why we should have stock in duct tape!

I came back into the living room where Jeanie was holding the baby, who still had 2 clean diapers left.  Jeanie told me she had some more bad news:  the ceiling was leaking.

What??? In the upstairs stairwell?

I'm still not sure where the water was coming from, but in my mind I imagined the following scenario.  Wind blowing!  Rain downpouring!  White caps on the roof rolling over the lip of the skylights on the roof.  So----as soon as these storms leave us and it's sunny, I'll have to get on the roof and see if that was the case.  As for now, there's a bowl to catch any rain that makes its way in.  (When the rain and wind died somewhat, there was no more water coming in the skylights.)

Day 2.......The train isn't running.  Jeanie and baby need to go back to Fairbanks.  We washed diapers anyway and then we readied the house for being alone for the next day by shop vacuuming the sump pit again and re-taping the hose to the rain pipe all over again.

Day 3 -- I drove Jeanie to Cantwell (half-way) across many, many flooded rivers.  I arrived home about 5pm and guess what?  The power was out AGAIN! Power came on finally about 9:30 pm.  Still raining!

Day 4----Just checked the sump pit and there's no water.  All of the pumps are working at the moment and as this goes to press, it is NOT raining!

Decision:  no more debating about which generator to buy.  We have to have one.  Not for lights, not for heat, not for water----to run the pumps.  Too bad solar panels cost so much.

ONE LAST NOTE:  This only happened one other time in this house's history according to the builders/previous owners.  They discovered the solarium flooding in the middle of the night and were so flustered and half -asleep, Lu Anne fell in the pond.  Funny.  I'm hoping our story gets funnier as we tell it.  :-)

Spring has sprung here in the Bioshelter.  There is so much water melting that we are running water down the mountain side--our cistern over-floweth. 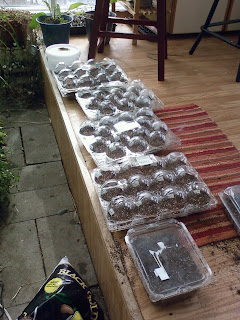 One of the really hard things to deal with is waste.  What do we do when you see other people polluting or purchasing things that will end up in the land fill?   It's hard.  I sounded pretty disgusted when I asked why my place of employment was buying apples in a plastic containers.  The staff said, "What's wrong with that?  It makes it so they don't get bruised."  I grimaced again and she said, "Why, do you want them or something?"   Without really thinking, but trying to make a point, I said, "Sure.  I'll take them."

I've collected them all winter.  I have about 50 of them.  All waiting for spring.   Here they are! 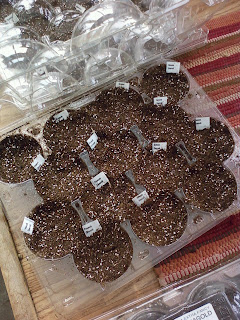 I have rescued them from the landfill, but maybe only temporarily.  I'll let you know how they work.

I planted Stinging Nettle in the salad box there, but in the apple cartons I planted two kinds of Basil, two kinds of Oregano, Echinacea, Chervil, Calendula and some other things I can't remember.

I thought I'd show you the other things that have been growing: 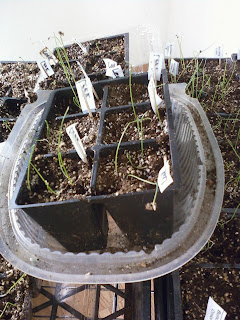 That is a bunch of LEEKS.  I'm using the plastic chicken cover (from a Safeway roasted chicken) to feed it water. 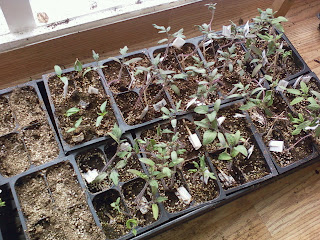 Here are all the tomatoes.  I MAY up-pot these directly into the green house.  Not sure if that is the best idea for tomatoes since it's still kinda cold in there.  Hmmmm. 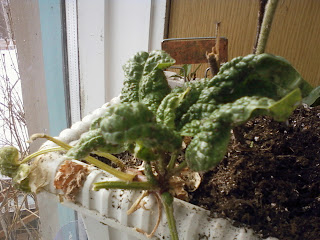 Yeah, New Zealand Spinach.  It grew all winter, slowly but surely.  The aphids attacked it---it keeps growing.  We wash the aphids off and eat!  :-) 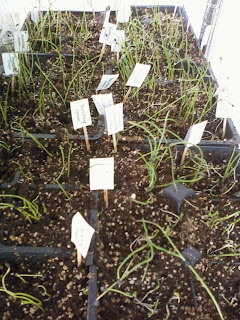 Bunching onions.    Yes!  I want A LOT.  Apparently they are good to keep pests away.    The a-word even (those which shall not be named) 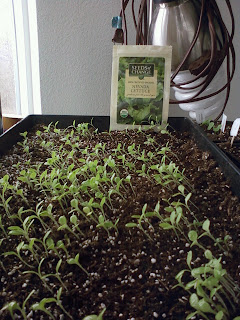 Lettuce.  I haven't decided if I'm going to let some of these grow up, or just eat the greens.  Maybe both. 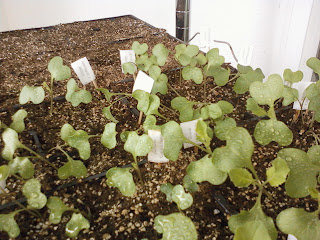 Last but not least-----the califlower.   The cat has killed three little critters this week.  I hope those voles and shrews are getting the message that they can't come here and eat my califlower again this summer.

I hope to continue writing here this season.  The season is off to a GREAT start!  :-)