Building with clay/straw in Alaska Part 1

Prelude:  Why clay/straw?  It is natural and will return to the earth one day.  It is very fire resistant because all of the straw is covered in clay.  Mice don't like eating straw covered with clay and lastly, it breathes---the moisture wicks in and out of the building making it very healthy.  The question:  what happens in the Anchorage area?  Will the clay freeze and crumble?  We don't think so.  But life is always an adventure, right? 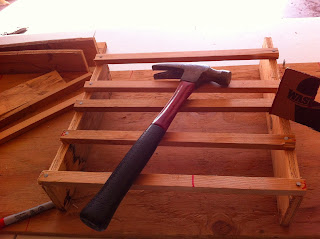 What a glorious day it was to work on a clay/straw model of this summer’s greenhouse project.   I went down to the garage early to build the frame of my model greenhouse.  Since we’re going to have 2x8 walls, I found scrap wood that might represent 2x8.  I then scrounged for some sticks to use as lathe strips and found my old 1/2x1/2 sticks I used for Christmas decorations one year.   I nailed them all together with tiny nails.  Some holes I had to predrill so they wouldn’t split. 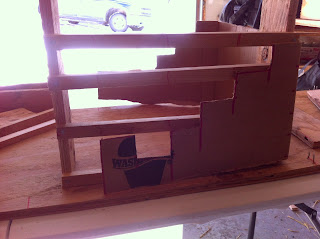 I had made a cardboard model the night before so I had something to go by.  I wanted the cardboard to fit on the outside of the model, so that we could see where the terraces were going to be.  Alas, I didn’t plan on the thickness of the wood----I’m sure it’s a common mistake.  I took note to change my Google Sketchup to show the thickness of the walls. 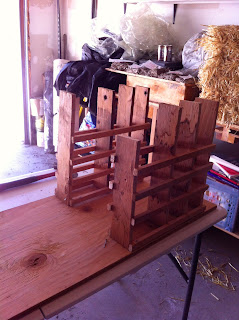 I finished the other side and was ready for the class to begin.  I noted that had I been a better carpenter and better at planning out my pieces, I would have had shorter 2x8s at each section to denote the falling slope we are building the greenhouse on.    I could have put a piece of roofing on it so that it would slope.  But, such is life.  I didn’t like to use that scary circular saw very much anyway.

My workshop participants arrived and we were ready to start.  I introduced them to the 4 different stations I had set up.  One was breaking up the hard clay, another was mixing the powdered clay with water to create slip, and another was cutting pieces of straw to provide the cob with tensile strength. Next was the straw/clay mixing tub, to mix the wall insulation.  We carefully looked over the pucks we made at the last workshop and chose the recipe we liked the best.   Finally there was the tarp with a bag of rough sand and ¾ in. rocks.  Once the slip was ready, they could start making mortar. 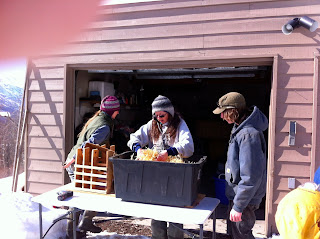 It wasn’t long before we moved all the stations outside into the sun.  The garage was too cold and we didn’t want to shut the garage doors and leave the sun outside alone.  So… everything came outside.

The clay had been stored in the garage and it was VERY cold to mix.  Note to self:  next time buy some rubberized gloves. We tried mixing the clay/sand/rocks in a tub.  For the real greenhouse, we’ll use a concrete mixer. 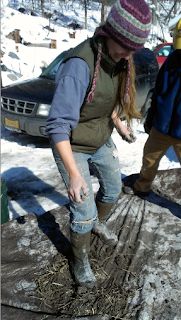 For the first batch of clay/straw, Bridget used her hands.  She and Ian kneaded it much like you would knead bread.

It was such cold work on the hands, we pulled the tarp outside too. 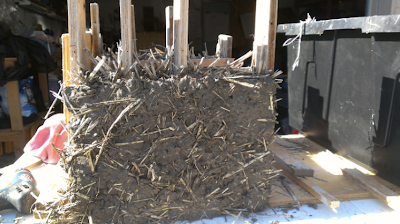 We ended up with a model that looked like this.  Obviously we should have waited for the inside straw/clay to dry before we put the outside covering on it, but we did learn that even though it looks goofy, apparently it’s good to have straw sticking out. That straw collects the rain drops that might otherwise run down the side of the structure and allows the drips to drop away from the clay walls.  So, maybe the inside walls will be nicer/smoother looking.  But we saved that for another day.

All in all, it was a great day playing in the mud!  Next big task:  melting the snow on the building site.  Ashes anyone?

(I'll go and take another picture from the top down, so you can see the clay/straw stuffing on the inside of the frames.  It was fun!)

**  If you would like to learn how to do this, you can sign up now for the first of several workshops this summer:  http://www.eventbrite.com/event/6280935447 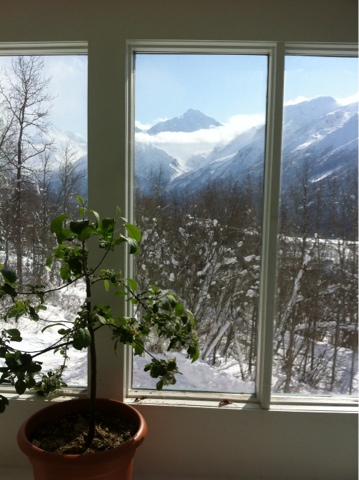