Ode to the Midge

I now have swarming midges!  Can you believe it?  They eat aphids.  That's a good thing, right? Well, check out a picture of a midge.  Not bad, you say?  Hrumph.

They are like a non-biting mosquito and they love swarming.  Especially above ponds.

Those midges are making me itch just sitting in the solarium next to them.  It's psychological of course, but why have a solarium if you can't sit in it without feeling itchy?

Here's a picture of the swarm, 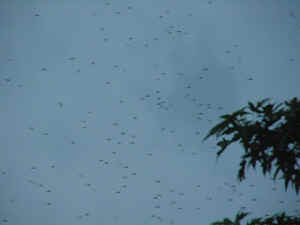 No, those aren't just spots on your computer screen, they are a swarm!

I first got out the vacuum cleaner and sucked them up.  That was fun, but time consuming.

Next, I got a battery powered swatter.  That also took a lot of energy, but was so satisfying when I heard the zap that said I had electrified the crazy thing!  I didn't get nearly enough zapping sounds to warrant the continued swatting.

Next I got out the Vaseline and put it all over a paper.  I swung it over the pond in the late afternoon, and caught a lot, but I couldn't stay there all day.  I have things to do, places to go, dirt to dig in.

So I bought a sticky trap.  In an hour, that sticky trap was full of midges.
I swear, they must triple their population every hour.  That didn't really put a dent in them.

Yesterday I went to Far North Garden Supply.  What a nice lady.  After she understood that I couldn't poison them because that's where our drinking water is, she got out the books to find out which predators eat Midges.  She did warn me that if I got rid of my midges, I would have aphids again.  Suddenly I seem to like aphids and their predators, ladybugs, a lot more than swarming midges.

So, apparently these things crawl down into the mud where the midges are hatching their eggs and they eat them!  They eat everything---even earthworms.  So what happens when a nematode falls in the pond?  Will they attack my koi???

I have so many midges, I'm imagining that the nematodes will quickly multiply.  Then what?

Does anyone know where I can get frogs?
Posted by Cindee at 4:18 PM 5 comments: