The aphids are dancing in the sunshine

I zoomed out the lens of the camera and pointed directly in the middle of the swarm of aphids dancing in the sun.  If you look close there are several little blurs in the photo:  al aphids.  But ONE wanted to be the star.  See him?  He must have been the perfect distance from the lens because you can see him clear as day.  He's just to the left of center flying downward.  See him? 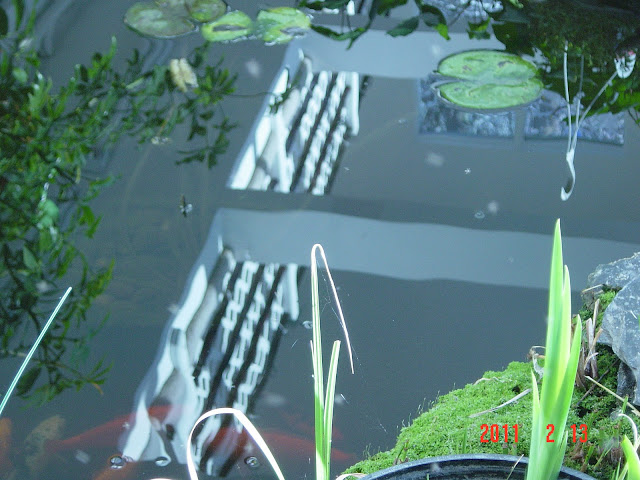 Posted by Cindee at 3:49 PM No comments:

Evolving the future of the pond.

I'm learning by observation, trial and error.  That works, but I know some of you out there have a lot more experience than I do at gardening.  I have to decide soon if I'm going to dig up the other half of the pond filter and clean out all the debris.  I dug out half of it the first summer we lived here and that improved the quality of the water immensely.  But the other side is all root bound too.  So. . . .  I thought I'd start by looking at pictures of the pond over the years to see if I can see any patterns. 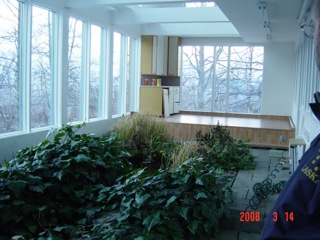 Here's what the pond/solarium looked like in 2008 when we moved in!  The house had been empty for a year. 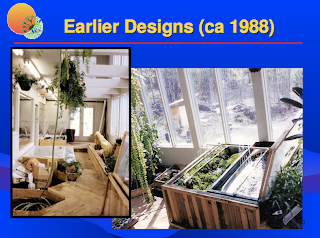 OKAY---going way back to 1988 where the water cleaning system started in tubs in the solarim.  They were also trying out aquaponics and other things.
Sadly the wood had to go because of the infiltration of slugs.  They were so bad that apparently you couldn't walk out there with stocking feet for fear of stepping on a slimy slug!  Yuk.  I guess they didn't want a duck.

The water cleaning system moved to the basement because of filter flies and smell as I recall. 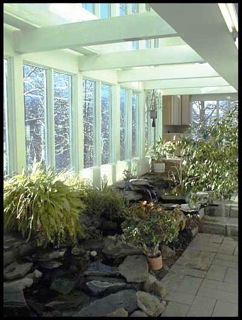 I don't know when this was.  I'm going to have to guess sometime in the 1990s.  The vine isn't there yet and the plants are mostly potted. 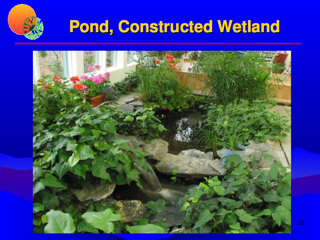 This must be from the early 2000s.  Bob, the builder, was doing talks around the state and this was from his slide show.
In the back around the pond that very tall airy plant is dwarf papyrus.  I haven't tried that one yet.  On the right side of the pond in front of the dwarf papyrus was a green tall plant that stood upright until it got tall and then it fell over.  It never bloomed.  It was kept (I was told---
because it grew despite the aphids! :-)

I see the ivy was growing along the sides by this time. 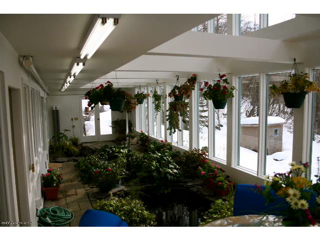 Winter 2004????   I'm just guessing. There's no more dwarf papyrus.  It looks like lots of geraniums and begonias.  Way in the back on the right side is a jade plant.  It was dead when we moved in, so I replaced it.  It seems to like growing in the corner---not too much sun. 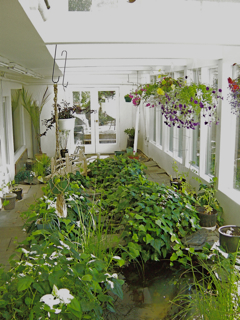 Our first summer here:  2008.  It was rainy and we hadn't started cutting trees yet. It's funny that we bought a palm tree.  Obviously that died even before the summer was out--too cold.
The white on the leaves is just sunlight---no flowers.  This is BEFORE I cleaned out half of the bio-filter which was root bound.  It's also before I started cutting back the ivy.
I put in a bridge to the back deck door---you can kinda see it back there.
Early summer 2009 -- the summer I cleaned half of the biofilter. That was the summer with sun and we had cut down maybe 5 trees so more sun could get into the solarium.

Here's the pond during the summer of 2009 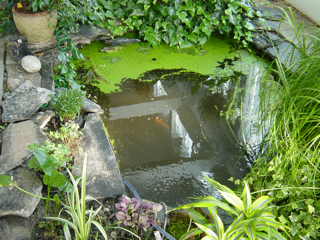 We were trying to cut the amount of sun into the pond because it grew algae.  We put duckweed in the pond.  We had so much duckweed that summer (hot weather?)  that we made duckweed soup.  It tasted like broccoli soup.  I tried Hostas in the swamp that summer and they grew well until fall and didn't come back the next year. 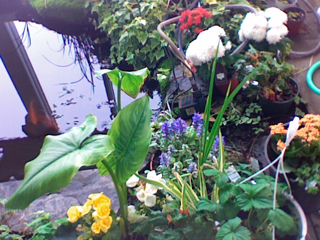 You can see all the things I tried growing that year in the biofilter around the pond. I had many pots there covering up the gravel.  I planted the irises, ivy and the cally lilly directly into the gravel.
Read more »
Posted by Cindee at 12:31 PM 1 comment:

Northern Pitcher-plant (Purple Pitcher-plant)
Sarracenia purpurea
This is a carnivorous plant. Insects become trapped in the pitcher-like leaves. The insects are then digested, and the nutrients used by the plants.

So in an early post from last summer, I told the story (here) of my idea of getting wasps in the solarium to eat the aphids.  I had also gotten a northern pitcher plant to help with the aphid problem.

Today I wondered why the leaves that ate the wasps died.  I snipped off the largest one.  (I'm thinking it's not coming back to life this summer.)

So---I may have to try to wash the other one out to see if I can unclog it and save the leaf!  I learn something new every day!

Posted by Cindee at 7:33 PM No comments:

Spring in the Solarium 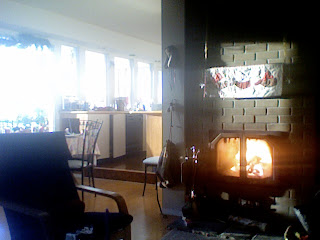 It's been about 50 degrees every day the last couple of weeks.  I think it has to do with the return of the sun! Remember that the 42x12 foot space is not heated.  It is warmed by the waste heat out of the house that we lose out of the windows as well as the sun.  The sun beams warm the gravel and the water inside the solarium and the majority of the heat is from that thermal mass.

So I thought I'd share the things that are blooming and growing despite all the snow outside. 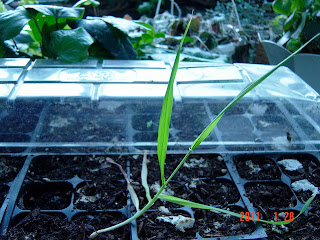 This is the barley I planted last September.  Just like the energizer bunny!  It keeps growing.  (It was however the only seed to germinate out of 2 doz.)

Looks like maybe I should put it in another pot. 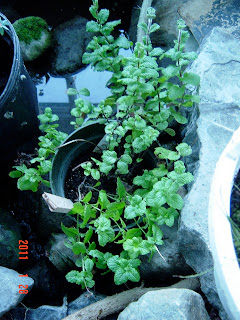 MINT-- I can't remember which kind, but it's been nice to have fresh mint all winter.  It's especially good in Mojitoes.  :-)

It serves the dual purpose of repelling aphids.  So I have several types of mint around the solarium. 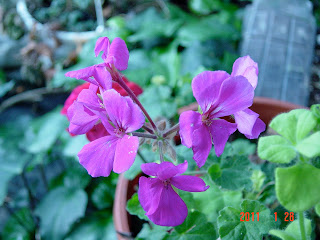 May geraniums have always been hit hard by aphids, so I took most of them upstairs to the hot tub that doesn't work.  They are growing nicely up there, but these----planted in the center of the mint plants--- are continuing to do well down here.  We'll see if they can keep clear of the aphids, now that it's getting warmer. 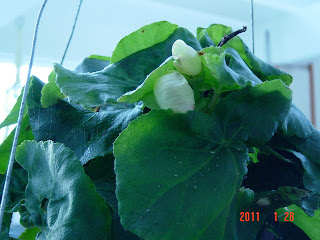 This is a begonia that was chewed on last summer by aphids.  I moved it outside to see if the aphids would leave it alone.  By fall it was almost completely dead.  But I started watering it and low and behold when I brought it in the solarium for the winter, and the aphids had all been frosted off of it, it decided it was spring.  So all winter this begonia has been growing and now is producing little blooms.  I attribute a lot of the success to the pot it's in----a recessed water space at the bottom, so it can draw water when it needs it. 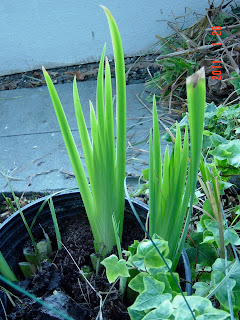 These I got last summer at P&M's nursery down the road.  They are yellow irises.  They never really died down over the winter, but you can see on the right where I trimmed one of the leaves.  This week I pulled the leaves apart and saw all of these little leaves coming up, so I trimmed off most of last year's and these are emerging.

I really hope they bloom this year.  Last year they didn't.  They just got really really tall.  I attributed it to a moderate climate in the solarium.  I MAY have to move them outside to the garden to see their yellow blooms. 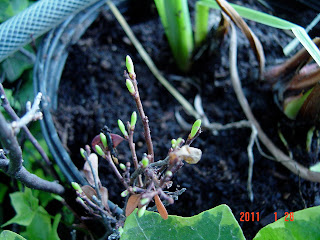 Ah, my pride and joy.  I was told that the only way to get blueberries to grow on your property was to eat lots and lots of blueberries and then collect your own waste and plant it.  Rest assured, that is not what I did.

Last fall Curt and I went up and hiked around the Matanuska glacier and dug up some blueberry bushes.  We planted them in my berry patch, but I took some of the branches that had come loose and just stuck them in the mud around the pond in the solarium.  Last fall they bloomed and I didn't know what to do.  Now they are leafing and I have a plan.  If I see blooms, I'm going to get a tiny paint brush and try to pollinate them.  Wouldn't it be cool to have blueberries growing in the solarium???

These primroses have been so hardy.  They keep blooming at about 3 month intervals all year long!
In the back of that pot you can barely see the nasturtium hanging on to life.  The aphids didn't like nasturtiums either, so maybe that's what's helped this primrose?? 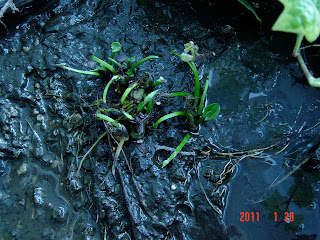 Even the marsh marigold is peaking out of the mud around the pond.

Today is seed planting day, so I'd better get with it.  I hope to add new little germinated plant pictures soon!  :-)

So, it's spring already in the Solarium.  I've been waiting just for the right time to plant my mushrooms.  I'm fairly certain it won't get too cold in the solarium, although I'm taking a risk.  If colder times come, I'll just have to move my logs inside to the basement.

First I pulled out the stored alder logs my neighbor Raymond helped me cut last fall.  I stored them inside to dry where no other molds or mushroom spore could find them. (I'm assuming) 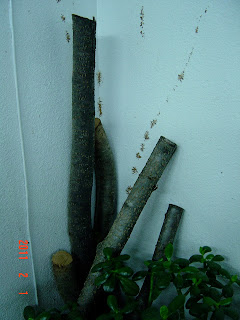 Next I got Curt's electric drill with a 5/8 inch drill bit and started drilling holes about 1 inch deep. 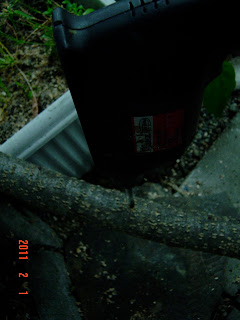 I made the holes in a diamond pattern, but only on the top so I could lay them down and have the mushrooms sprout up---I hope!  :-) 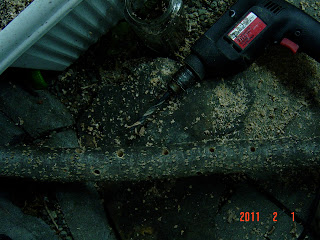 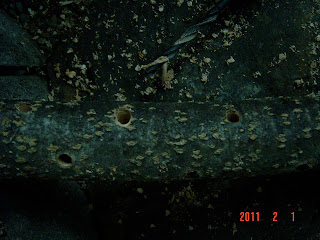 Next I took my mushroom spore plugs and inserted them in the holes. 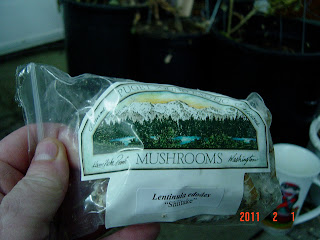 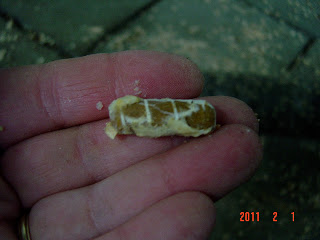 I needed a rubber hammer to pound them in.  Sometimes they didn't go all the way in.  But I pounded them flush with the wood.  I hope that's okay. 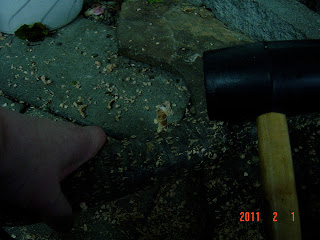 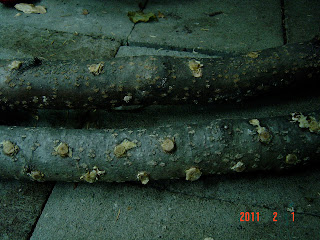 Now I'm ready to store my logs for 6 months.  I have to keep them damp and dark but not wet.  So once or twice a week water on them.  Supposedly in 6 months time, I can stand them up in the wet sand and mushrooms will sprout!  :-)