Yes....2020.  I see you.  You have arrived.  Something my sister and I never could believe we'd ever see.  Mom was doing laundry in the cement basement with the old washer.  There was an electric ringer she had to put the clothes through before she could hang them up in the basement.  Sandee and I were riding our bikes or trikes around before all the clothes were hung up.  Mom wouldn't let us help.  She thought we'd get our fingers stuck in the ringer and be maimed for life.  So we were contemplating how long we'd live.  It's so funny that I remember that moment so clearly. 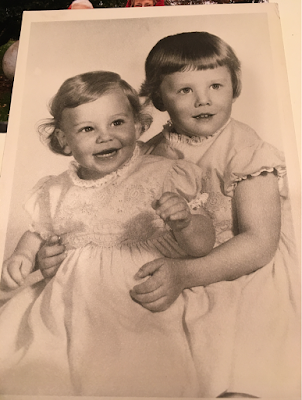 Years later when we were having our 2000 bonfire on the beach near her house in Texas, waiting for the Y2K disaster to strike, I reminded her of this ceremony we had done when we were little.  She had no recollection.  But she was distracted with her 7 kids of various ages (5 adopted) swinging marshmellow sticks around the fire.

It's ominous now....but we continued the game and when I got to 2020, she said no, we would never live to see 2020.  I said we would.  We'd only be 60 and 58.   I can't remember what happened next.  Maybe mom called us to help hang the clothes on the basement clothes line, but I don't remember doing our obligatory race around the poles.

In November 2018 she died of a pulmonary embolism.  She predicted it back when she was little.  So here I am welcoming 2020 without her.  I'm the one left to remember and to document life in the 20s.  So my new decade's resolution is to do more writing about life, not only for my sister....but for my grandchildren and those who come after me.
Posted by Cindee at 11:53 AM