Is the bubble bursting???

We moved into the Bioshelter 10 years ago and role modeled a different kind of western living.  We learned so much, but we also realize it’s not enough.  Curt and I are really taking a hard look at retirement. How do we reshape a system?  It’s so much easier to start over.  I think we should become Amish and go live in the woods at the cabin.  Curt isn’t so sure, but the system we are in, our culture, is really becoming more and more DE-generative and the possibility of something that’s regenerative seems out of the realm of possibility.

If suddenly Big Ag can’t feed us there would be a crisis, so we’d be forced to change.  So how soon is that crisis coming?  I read 1491, a book about before Columbus arrived.  It seems the woods were abundant food forests that the indigenous cultivated.  Could we do that?  Maybe, but in a crisis situation, it’s better to have the life boat already built.  So how do you build the ark, if it hasn’t even started raining?

I think our culture is almost at the edge—the crisis is almost here.  It’s so hard to know.  We have to take exponential growth seriously. This video helps explain it.  Please watch it.

These days hockey stick graphs are everywhere and they seem to be getting worse every year. 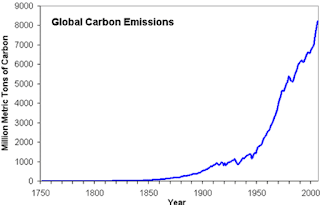 And the next hockey stick graph we aren’t really allowed to talk about:  too many people.  The UN put this graph together. 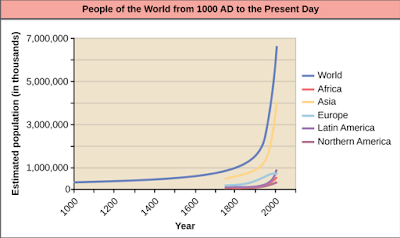 I think oil consumption is my number one concern. If that bubble bursts we are in big trouble.

Thinking about our big ag system made me do some research.  This came from the University of Ottowa, so this might be Canadian statistics.  It takes 400 gallons of oil to feed one person for 1 year.

It stresses me out to know that when the fictitious Beverly Hillbillys struck oil, they paid $0 to get the oil out.  Now we may be using a barrel of oil to get a barrel out of the ground.  Here’s the quote:  “If we have energy returned on energy invested (ERoEI) = 1 then the net energy is zero. We use as much energy to gather energy as energy gathered. 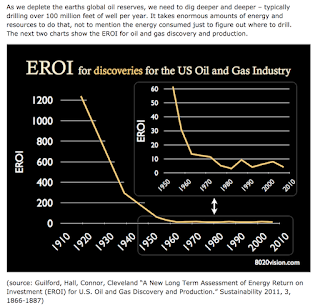 Here’s the historical numbers from the Energy Matters  blog site is:  “ERoEI for finding oil and gas decreased exponentially from

The EROI for production of the oil and gas industry was


So where are we now???  How much energy does it take to pull more oil out of the arctic?  According to Peak Oil, for things to keep going as we are used to, we must have at least an ERoEi between 5 and 7.

Okay, I’ll stop now. I’m beginning to feel like Chicken Little. “The sky is falling.” Who wants to come to the cabin with us and live off the land??? ☺